Want to learn more about starting a gaming center? Get a free consultation.

The COVID-19 coronavirus outbreak has had a massive impact on live events, including esports tournaments. Several events now stand canceled or have moved online to adhere to government guidelines of social distancing. Esports has a unique advantage over their physical counterparts during these trying times as they can go online and continue to provide quality entertainment to fans.

The rapid rise of the COVID-19 coronavirus outbreak has forced governments all over the world to ban large gatherings, and in some cases, deny permissions for local events. IEM Katowice, ESL Pro League Season 11, ESL One Los Angeles and several FGC tournaments have been impacted due to the spread of coronavirus pandemic. Valve has also canceled the fourth Dota 2 Major and Minors of the 2019-20 DPC season.

Esports Is Breaking New Records in 2020

The World Health Organization urges people to work from home whenever possible. Schools and colleges are shut down for indefinite periods as communities look forward to ‘flatten the curve.’ More people staying home has resulted in a massive rise in the number of people consuming online content. Playing and watching video games has seen an influx of people.Despite IEM Katowice moving to an online format, it recorded the largest viewership for a non-Major CS:GO tournament. PC Gaming platform Steam has seen steadily rising numbers and has already breached 22 million concurrent players at the time of writing.

Games developer, Activision Blizzard, apologized to Chinese gamers for the long queue times in World of Warcraft Classic. The reason for these long queue-times was the massive influx of players (old and new). To accommodate these additional players, Blizzard opened two new WoW realms, hoping to reduce the workload on their existing, popular realms.

Another Chinese behemoth, Tencent Gaming’s Honor of Kings, saw over 100 million players trying to log on to their servers. The global business downturn due to the coronavirus pandemic is an opportunity for game companies to establish their presence and increase their footprint in the industry. Tencent made more 55 games free-to-play to capture a more substantial portion of the Chinese market.

The most popular games on Steam, CS:GO and Dota 2 are breaking new records. Valve’s free-to-play FPS game broke the million concurrent players mark and Dota 2 has also rebounded from its relatively gloomy numbers from the past few months. Despite the launch and popularity of new games like Fortnite and PUBG, the old games such as Dota 2 and CS:GO are holding steady as the top games on Steam. 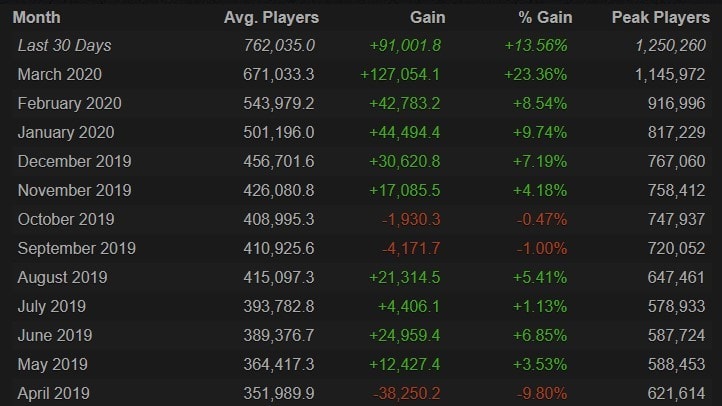 Valve’s digital games distribution service Steam has seen rising numbers over the past few weeks. With more than half the world in lockdown, an increasing number of people are turning to video games for entertainment. 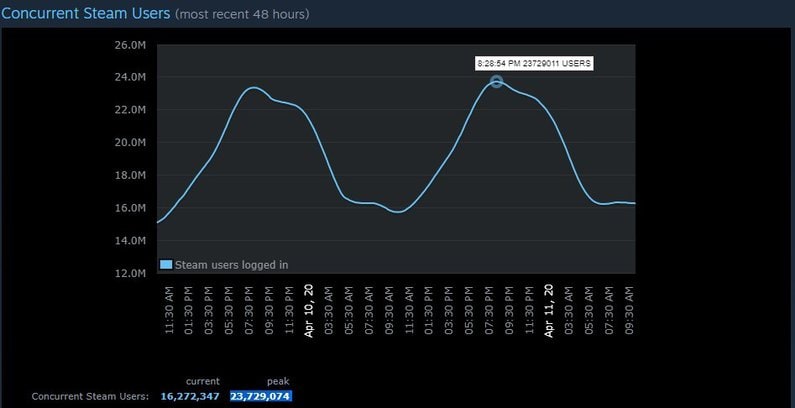 The previous record for the highest concurrent users on Steam was in February 2020, when the platform recorded nearly 18,801,944 users.

Sports Are Turning to Esports

The COVID-10 coronavirus outbreak has put physical games to a standstill. The NBA has suspended its current season while the MLB could postpone their upcoming season. While the NFL expects no delay in their season schedule that starts in September, things could change very quickly.

Meanwhile, sports leagues are turning to esports and their digital counterparts to keep their fans engaged. Players like Kevin Durant, Jazz’s Donovan Mitchell and Andre Drummond competed in a players-only NBA2k League.

Racing leagues were one of the first to turn to their digital options as most of the world went under lockdown. The success of the online sim regulations surprised the organizers, who have since quickly adapted to the new format. Motorsports fans were already used to seeing their favorite drivers compete on these digital platforms, either as practice or entertainment. So the switch to watching their favorite drivers on the digital screen was not a big one for many fans.

Sports athletes have fully embraced gaming and have resorted to live-streaming in the times of the coronavirus pandemic outbreak. Dallas Mavericks player Luka Doncic asked fans for help on setting up a streaming setup while fellow NBA player Meyers Leonard is competing in a Call Of Duty tournament.

With the cancelation of several sports events, esports is slowly creeping into the mainstream media. Most of the bigger betting websites have only esports tips available for their users.

ESPN aired twelve hours of esports coverage on April 5, including games like NBA2k, Madden NFL 20 and Rocket League. These titles filled the void left behind by the cancellation of several physical sports broadcasts. Instead of airing past replays, showing live content to users helps the TV channel garner users’ attention.

With no fixed deadline to the pandemic in sight, we could see many countries extend their lockdowns. Esports is one of the few industries that will benefit from this extension.

Esports is contributing to ensuring people stay at home in its own way. Playing video games is one way to provide social interaction during these uncertain times. Players log on to their favorite gaming service to chat and talk with their friends all over the world.With the growth of esports and the mainstream acceptance for many games, the post-COVID-19 outbreak period could see more people gravitating to video games and esports.

Want to learn more about starting a gaming center? Get a free consultation.